A famous economist once said that the washing machine was a more important invention than the internet. His argument was that it, plus some other household appliances, freed women from the drudgery of housework, in particular freed them from the huge chore that was the weekly household wash. This enabled more of them to go out to work, play a more direct role in the economy, and enjoy more fulfilling lives. There was nothing fulfilling in the work that my mother put in, mainly on Sundays, in keeping all of us in clean clothes and bed linen. All done by hand, with no detergents or washing powders. 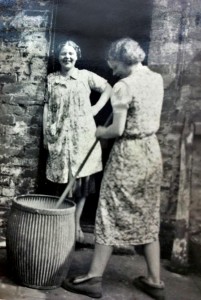 Dolly tub picture from Peter Halton.
A bit smaller than I remember

Her Sunday started very early, lighting a fire under the boiler in the cellar. The only heating in the house was from coal fires, and so the water for the wash was heated this way. The wash would have been separated into coloureds and whites, and maybe put to soak overnight. The details that I have are hazy because I never got involved, so what I know comes mainly from being a spectator of the process.
There were two or three tubs, each about the size of a water butt, and the process began with the clothes going into a tub with hot soapy water. This was agitated, intermittently, for some time, with a long handled thing with a flat round attachment on the end. Most pictures show a three legged end to the agitator, but ours was a simple round attachment.
After a while, the clothes would be taken out and worked on by hand at a shallow sink that my mother called a slopstone, a word I can’t find in the dictionary. This involved scrubbing using a coarse scrubbing brush and a big block of plain soap. Shirt collars and cuffs would be scrubbed and the rest of the clothes would probably get dealt with on a washboard, a corrugated metal thing with a wooden frame. The clothes were rubbed hard up and down this to knock the dirt out.
Then into the rinsing tub (tubs? would one have been enough?). At some stage around here the whites would have been rinsed in water containing a dolly blue. This was a little bag of something that went into the rinse and whitened the clothes. Presumably the same stuff they put into present day detergents to give the “whiter than white” finish.
She never starched any clothes that I am aware of. Dad’s shirts were all the detached collar type, and these were of a fairly stiff material anyway, and presumably didn’t need starch. Nothing else that any of us wore needed starch. 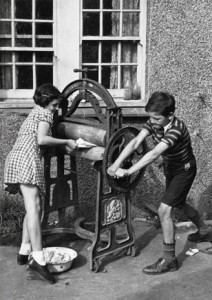 Finally the clothes went though the mangle. The only contribution I occasionally made to this process was to turn the handle of the mangle. As a small boy it was interesting to see how squeezing the clothes removed so much water, and I was happy to help. I have to say, though, that my interest declined with age.
Then the still damp clothes had to be hung up to dry. In summer on dry days they were hung on washing lines strung across the close behind the house. If the weather wasn’t being kind, they went onto a drying rack in the kitchen by the fire. This hung from the ceiling, but the clothes hung down to below head height, so the kitchen was an obstacle course. Any clothes that wouldn’t fit on the rack because it was full went on to a portable drying frame, a clothes horse, also in front of the fire, making it even more difficult to move around.
A damp clothing smell hung around for a long time, and even when they were dry, a lot of stuff stayed on the clothes rack as a convenient place to keep them.

The whole process took from about 7.30 in the morning, the lighting of the fire, to around mid afternoon sometime. There was a break from the washing late morning, but that was only to make Sunday dinner for us all. I can’t imagine that my mother looked forward to Sundays at all, it was a long way from a day of rest.

It was hard work and heavy labour. Shifting wet sheets and such from tub to sink to tub must have been back breaking. And hands in hot soapy water for the best part of a day couldn’t have done much for her skin. And while it’s true that we didn’t change our outer clothes as often as we now do, the family wash on a Sunday morning must have made an impressive pile.
And where were the men of the house? Well dad worked shifts at Gorton Tank, and was often away at work or about to go to work. If he was on one of his days off, he might have gone to the Locomotive Working Men’s club for a couple of lunchtime pints, and we boys were not expected to contribute, and in truth would have been no help at all.
Getting back to the original statement about the liberating consequences of the washing machine, looking after a house and family was a full time job, with very little in the way of household automation and no convenience foods. Few married women worked at jobs outside the home, and this was the accepted arrangement, men went to work, and women did the housework, so men were not expected to contribute in the house. And they didn’t.