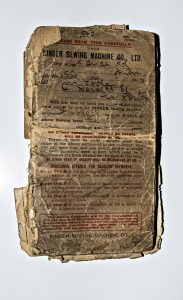 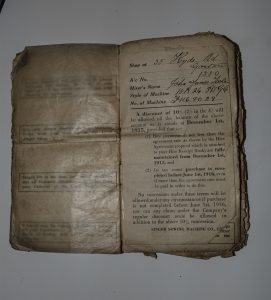 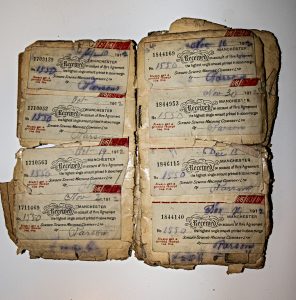 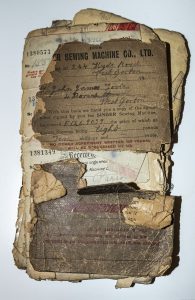 This very fragile book dates from 1912. It was part of my mother’s possessions when she died, and I came across it again recently when doing some clearing up.

It’s a repayment book for a hire purchase agreement taken out by John James Toole, of 4 Dorset St, West Gorton with the Singer Sewing Machine Co of 244 Hyde Rd.

There are in fact two names in the book, Mr Toole, and then later, in 1915,  Mrs Toole. Why this would be is impossible to say at this distance in time. Perhaps Mr Toole died, perhaps they separated, who knows. Perhaps Mr Toole defaulted on the payments and Mrs took them over, because her name appears in 1915, and the repayments would not have been complete by then. Maybe he was serving in WW1 by then, perhaps killed. There are many possible scenarios.

The details of the finance are interesting. The machine cost £8-10 shillings, or £850 in today’s values. That would have been an enormously significant purchase in 1912, when the average wage was £67, or about £1-6 shillings a week. I would imagine that Mr Toole was earning about that much, as they lived in a modest house.

Repayment was 3 shillings a month, probably on a par with the rent on the house.

Mrs Toole was presumably using the machine commercially, perhaps working for a tailor, or as an outworker for a clothing factory. it would certainly be impossible to justify that expense for a machine for a hobby. Assuming she had time for  hobbies.

Dorset St was off Clowes St, not far from where the West Gorton Medical Centre is now. The picture shows  houses typical of the densely packed  terraced  houses that made up east Manchester at around the turn of the century. There was a rather large pub, the Marsland, on Dorset St., probably their local.

I don’t know how this book came to be in my mother’s possession. She was married in 1928, and as most married women at that time had sewing machines, she might have bought it from Mrs Toole. But why did she get the repayment book as well? Proof of purchase, to show there were no outstanding payments? Speculation again.

My mother’s machine certainly was a Singer, originally a treadle drive which she later had converted to an electric drive. 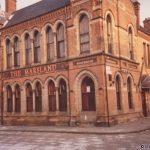 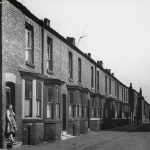