Looking at photographs of Openshaw in the 1950s, you might think that every street corner had a shop, and often another half way down. While that’s not quite true, there were certainly a lot of shops in those days, and most of them would be small, family owned shops. These were the days before supermarkets, and shops were specialised, grocer’s, butcher’s, etc., meaning that a shopping trip meant visits to several shops, nothing like a one-stop shop at a supermarket. 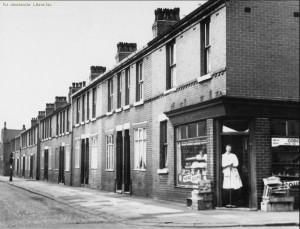 Cars were not widely owned, certainly not in the early and mid-fifties, and no houses that I knew of had any fridges. In fact I don’t remember any having any larders or way of keeping food cool. So, in the summer in particular, food shopping was a daily activity. The scarcity of cars and the need for frequent shopping meant that shops had to be conveniently close. Shops on the side streets carried some of the daily essentials, bread, cigarettes, soft drinks, tins of vegetables, soup, fruit and so on, which otherwise would have required a long walk to Ashton Old Rd and the grocer’s.
This was in the days of resale price maintenance, which meant the manufacturer specified the price the goods had to be sold for, and any shop undercutting those prices could have its supply cut off. This is how the small shops survived, by being no more expensive than the larger stores.
The side street shops served a very limited area, a small number of potential customers. A couple of hundred yards down Cornwall St from us was a bakery, Mrs Sheldon’s, and given the nature of the surrounding area, bounded by Gorton Tank on one side, the canal on the other, and Ashton Old Rd to the north, and the railway bridge on the south side, she had a very restricted market. But she baked fresh bread every day, and presumably made an acceptable living out of the small number of customers she did have.

From where we lived, on Cornwall St, most of the decent shops were up the Old Road, towards the Alhambra cinema. Just over the canal bridge opposite Lindsay Williams, was a butcher that my mother used, being very convenient to our house.

My mother’s grocer’s of choice was L G Browne’s, situated towards the Alhambra cinema. I was very surprised, seeing the picture after all these years, just how small the shop was; just a standard 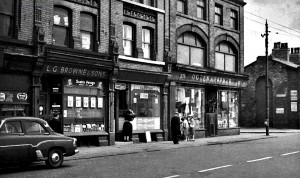 shop unit. When I was very little, visiting Browne’s with my mother, it seemed like a very large place; well, when you’re 4 or 5, the world is a much bigger place, but I had a clear memory of Browne’s being a big shop. The bacon slicer was a fascination for me, seeing the block of meat go on one side and thin slices-specify the thickness you want, and how many rashers-coming out the other side. The machine was hand cranked and the big cutting wheel and the way the block of meat slowly advanced was very interesting to a small boy. There was no cleaning of the cutting wheel between customers that I can remember, if the next customer wanted slices of corned beef, the remains of your bacon would presumably be on the first slice.
Very little of the food came wrapped, it was cut by the grocer off a side of ham or bacon, or a large cheese, and individually wrapped for the customer. Pre-packed food came with supermarkets and the need to make the selling operation as labour efficient as possible.
One of the great delights of going to Browne’s was being given a handful of broken biscuits. Biscuits came in tins to the retailer and were sold probably by weight. Any biscuits that were broken in transit were the retailer’s loss, as no-one would be prepared to buy them, so they were handed out to small children as a treat.
Further up the road, next to the Alhambra, was Redman’s, a bigger store than Browne’s, and although I have to assume that we used it, I don’t have any memory of it, or what it was like inside.
Across from Redman’s was Bostock’s the baker, with renowned cakes.

The Co-op, on the corner of Lees St was the largest store around this area, clothes and household goods. As kids we would go there every Whitsun for a new outfit, you had to have new clothes at Whitsun or the birds would mess on your old clothes. I suppose we also showed them off in the Whit walks, an annual church driven festival. I don’t have any memories of taking part in the Whit walks, but I imagine I must have. I became a members of the Cornwall St Baptist Life Boys for a while, and I must have walked with them. 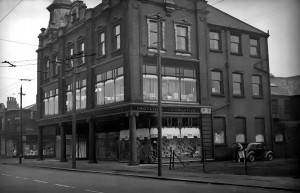 The co-op had one of those aerial catapult wire systems that took the bills and customers’ cash to a central accounting office, and from there a receipt and change came back. It was amazing for a small boy to see these cash carriers whizzing about the store on a sort of overhead rail system, it would have made a great toy.
Tommy Torr’s was on the north side of the Old Rd, near Sandywell St. It was a greengrocer’s and also a fishmonger. We used to use it for fish, I have no recollection of buying vegetables from there.
Further up towards the Alhambra was a UCP shop. United Cattle Products was a chain of shops selling tripe and similar stuff coming from cows and pigs. My mother used to work for UCP for a while, and latterly ran the AOR shop. A lot of tripe was eaten in those days, and UCP were a large company, as well as countless tripe shops, they ran over a hundred restaurants

in the north of England. As people got a bit more affluent, tastes changed and moved upmarket, and tripe and those associated products fell out of favour. I don’t know when UCP stopped trading, but they were still going strong in the late 1960s. 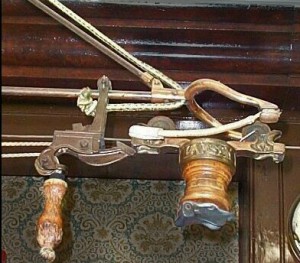 In all these shops service was via an assistant. You waited your turn at the counter, gave your orders and the assistant got the goods, or weighed and wrapped them, and gave them to you. This meant you had to be organised, with a shopping list. If you missed something, you couldn’t go back to the aisle again and get it, you had to wait your turn again. Inefficient? Probably, but at least you developed a relationship with the shopkeeper, rather than get an anonymous check out person as you do in supermarkets.
One of the most impressive features of shopping in the fifties was watching the shopkeeper add up your bill. Your shopping items lined up on the counter before you packed them in your shopping bag, each item price was called out in turn, and the running total announced between items. All done in the head, and in old pounds, shillings and pence. No calculator, no bar codes, no till-totalled bill, all done by mental arithmetic. Could they do that now?
Other shops that I remember are the barber’s, across AOR and near B&S Massey’s. Hoppy he was called, because he had a limp. Short back and sides was the regulation haircut in those days, leaving your hair very short all around and longer on top. Looked awful, but everybody had them, so no problem. The style seems to be coming back, if professional footballers are any guide. Hoppy used to prioritise grown ups over kids, which was annoying and meant that sometime you waited a long time, but as a child in those days you didn’t have much clout.
The fish and chip shop was, I think, on the same block as Hoppy. As kids we used to ask for scratchings, the bits of batter that dropped off the fish as it was placed in the fat, and occasionally filtered out with a wire mesh spoon and put in a pile at the side of the fryer.
I don’t think as a family that we used the chippy very much, it would have been something of a treat. I can remember, though, that the fish and chips used to be served in newspaper-not very hygienic, but we survived.
Looking back on the 1950s, shopping seems very inefficient compared with now, the supermarkets, the out of town retail stores, and so on. But it was a very personal experience, you built up a relationship with the shopkeeper/assistant, and there was continuity. Today, in the 2010s, shopping is largely anonymous and focused mainly on separating you from your money. Openshaw’s shops were part of the glue that held the community together, having to do most to all of our shopping locally rather than having to go off-site to a retail park, helped to maintain a community spirit that was very strong.