There were an amazing number of pubs in Openshaw. Looking at the pictures posted on the Openshaw Facebook page, it appears that there is a pub every fifty yards or so.

The image here names 45, and that isn’t all of them, because there were two on  Cornwall St, where I lived, that are not listed. Those were the Napoleon and the Jenny Lind.

As an aside, I always thought that calling a pub after a major British enemy (Napoleon, not Jenny Lind) was odd, a bit like calling a pub the Hitler. But there you go.

There were also at least two Working Men’s Clubs, one on Cornwall St, one on Stanley St.

Two questions come to mind; why so  many, and how did they all make a living.

Most of them would have been built in the late 19th century, following closely the building of Openshaw and the influx of workers for the engineering factories. Factory hours were long, and there was no evening entertainment. Cinema didn’t get going until the 1920s, newspaper readership was low, and the growth of free lending libraries had only just started. Home was  not necessarily a comfortable environment, often poorly furnished and crowded. The pub offered some relief to the worker. But ale had to be paid for out of meagre wages, and feeding and clothing the kids must have suffered at times.

How the pubs made a living is difficult to compute. The ratio of men to pubs had to be low, judging from the number of houses and number of pubs. The customers would have been almost entirely men, women never visited pubs alone, and not often with their husbands. The pub was a serious drinking establishment, frequented by men, and unless the men spent a significant proportion of their wages on drink, it’s hard to see how the pubs could survive. It gets more difficult to understand the economics when we get to the 1940s and 50s, as there were many other things to do in the evening, and home was a much more welcoming environment. By then wages would have increased substantially and there was more discretionary spending money around, but there remained a lot of pubs in relation to the population, and I don’t recall any  pubs going out of business until Openshaw was pulled down and “improved”. 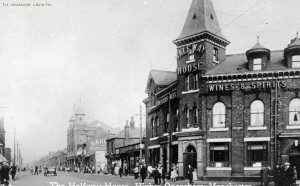 Most pubs were owned by breweries, and were tied houses, that is, they sold only the drinks made by the brewery owners. The landlord would have been a tenant, paying a rent, and keeping the profits from the sales. Keeping a single supply chain presumably meant that costs could be kept lower with profits shared between tenant and brewer, but even so, there were an extraordinary number of pubs.

Pubs were very different places in the 1950s. They were for drinking and sold alcohol or  minerals only, if you had asked for a coffee you would have got a very curious look. Food was restricted to packets of nuts and crisps (plain with a twist of salt), and it as rare to find one selling sandwiches or pies.  An occasional vendor might come round on Friday or Saturday selling packets of cockles or shrimps. They all had brown ceilings from years of heavy smoking. Most had darts boards, a few had shove ha’penny boards. Most pubs had two bars, the public for most of the drinkers, and the saloon for the more refined, or those looking for a quieter time. Drinks were a penny or two more expensive in the saloon. Children were not allowed, and when dad and mum were out together it was common to see kids sitting on the pub doorstep, kept quiet with a bottle of lemonade and a packet of crisps.

Opening hours were strictly controlled by law, and all pubs closed, theoretically, at 10.30 pm through the week and 10 pm on Sundays. Most localities had a few pubs that were flexible about closing, but a wary eye had to be kept open for patrolling policemen, and the noise had to be kept down. A landlord could lose his licence for persistent offending.

I have the impression that the difference in price between the off-licences and pubs then was not as high as it is now, with supermarkets using alcohol often as a loss leader. This kept the pubs busy, and a night’s drinking was not as heavy on the wallet as it is now. My first drinks would have been occasional pints of bitter in the mid-fifties at 1/6 a pint-that’s 7.5 pence in new money, which would be about £1.75 now. Which is about a half what you would pay in most pubs today, so the relative cost of drinks has increased dramatically. This helps, I suppose, to explain the large number of pubs, but still leaves the puzzle about how profitable they were. 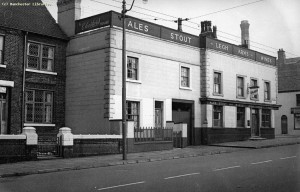 Legh Arms
One of the earliest pubs in Openshaw

The working men’s clubs were very popular for several reasons, not the least being that they were cheaper than the pubs, by reason of not making profits. They were always busy and were more sociable, with many more women drinking there. They organised dances, social evenings, and outings to the panto, Belle Vue, maybe even the seaside. My parents used the Gorton & Openshaw Working Men’s club almost exclusively, because if its friendly atmosphere, and it was just a few yards across the street. The Locomotive pub was on the corner of our street, even nearer than the club, but I have no recollection of dad ever drinking there. If he did, it was a very rare occasion.

My own drinking history of Openshaw was very limited. I left Openshaw for good when I was 24, and most of my socialising in my early twenties was in central Manchester, a lot of it in jazz clubs, with workmates and ex-school mates who were spread around Manchester. I think I went into the Loco twice, and not much more into the club. Which is why this piece is mainly about pubs in general, and not Openshaw pubs in particular.

Pubs in the 21st century are very different places. It’s rare to find one that doesn’t sell food, coffee and wines, and many of them look more like restaurants than pubs. Many reasons why this is, a major one being the very strict enforcement of drink/drive regulations. Selling less alcohol means that revenue has to be made somewhere else, and factory supplied food has meant that it’s easier to provide a varied  menu at reasonable prices. A lot of this change is for the better, but along the way the pub has lost a lot of its character in trying to be something more than a drinking establishment. 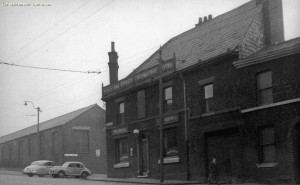