I grew up in an Openshaw that was dominated by industry, mainly light and heavy mechanical and electrical. The very first factories, though, in the Gorton and Openshaw area were mills, Gorton Mill in 1825, and the first recorded mill in Openshaw was High Bank Mill in 1861. There were other mills about which little is known, Union Mill in Tamworth St, Victoria Mill in Victoria St, and Imperial Oil Cloth Company behind Hampson Wrigley’s. 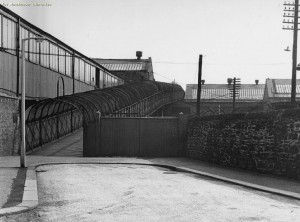 The move away from textiles to engineering was prompted by the construction of Gorton Tank in 1848. The Tank was initially a repair depot for the Manchester Sheffield and Lincolnshire Railway, later LNER. This was the first time that an engineering works had been built in Openshaw, and eventually it spawned a cluster of more engineering works. By the early 20th century Openshaw was the most heavily industrialised suburb in Europe.

A very good history of Gorton Tank is on Dave Gosling’s website here.

Beyer Peacock was the first spin off from the Tank, making locomotives. It was just opposite the Tank on the other side of the railway line, actually just in Gorton.

B&S Massey followed in 1861 on the site on Ashton Old Road opposite Cornwall St and next to the canal and canal bridge. I have memories of Masseys, not exactly pleasant ones, because we lived at the top end of Cornwall St, maybe a hundred yards from the external wall of Masseys. They made steam hammers and must have used them to make more steam hammers, because every ten seconds or so there would be an almighty bang, and the whole house shook. This went on all through the working day, and if business was good, all through the night as well. You got so used to it that you only noticed it when it stopped.

In 1880 Joseph Whitworth moved to a factory in what became Whitworth St, later amalgamated with Armstrong & Co to become Armstrong Whitworth, and later still became English Steel. This was a huge site at the corner of Clayton Lane and Ashton Old Rd, and must have employed thousands.

This is just a roll call of some of the larger companies trading in Openshaw in the early 1900s. The decline started from about the 1950s, and by the end of the 1980s, it had pretty well all gone.

I never worked in Openshaw, while I lived in there, I worked at Ferranti’s in Moston, turning out Bloodhound missiles. So my knowledge and experience of Openshaw’s factories is slight and second hand.
My dad worked at Gorton Tank; he had been an engine driver with LNER, working up, as you did in those days, from being a cleaner, then a fireman, and finally an engine driver. He ended his railway career as a foreman in the repair shop at the Tank. I’m not sure how he got to be in Openshaw, as he was born in Stoke on Trent, and I assume he worked for the Great Central Railway before it became LNER in 1923. One of the highlights of his driving career was driving a very early Flying Scotsman that was brought out of retirement to celebrate the jubilee of a record breaking run from London to Edinburgh in 1888. He drove it on a trip from Manchester to Liverpool. 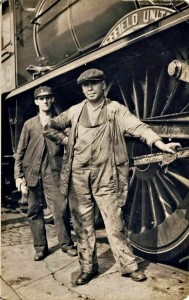 I don’t know much about his driving career, as he was working full time at the Tank as a foreman when I was growing up, but he must have driven some seriously impressive locos-I have a picture here of him in front of Sheffield United, which looks like it could be a Pacific class.

Working for the railways, he got subsidised travel, and a small number of free tickets each year. This meant that we could go to some interesting places for holidays, provided, of course that we went by rail, and also by rail company owned steamer. So we had several holidays in the Channel Islands, the Isle of Man, and one in Ireland.

My brother worked at Ferguson Pailin, near Fairfield Road. They made high voltage switchgear, used on the National Grid, where voltages can get up to 440,000 volts, and needs special equipment to turn it on and off. Fergie’s seemed a reasonably healthy company, but was taken over first by Associated Electrical Industries of Trafford Park, and later by GEC, run at that stage by Arnold Weinstock, who held the purse strings in a vice like grip. The factory closed some time in the 1980s, I believe.

Before Mr Weinstock’s time, Fergie’s had been a very forward looking employer, and had bought an estate in Mottram near Prestbury, for the use of the employees. There was a large house with dormitory accommodation, very large grounds, and a well stocked fishing lake. I went there several times, it was a great place to visit, and literally a breath of country air compared with Openshaw. It was sold off by Weinstock and is now a de Vere hotel, conference centre and golf course.

This has been a very brief and incomplete history of industry in Openshaw. If anyone has information they can contribute, please do so via the comments field, or on the Openshaw Facebook page, and I’ll try to incorporate it into this page.