The development of Openshaw as we know it began in the 1850s, when the Manchester Sheffield and Lincolnshire railway built Gorton Tank for the manufacture and repair of locomotives. Until then, Openshaw was a small village with a population of 2,000, and was outside the Manchester boundaries.

Beyer Peacock followed soon afterwards, and housing for the workers followed after that. So it’s reasonable to assume that most of the houses were built in the second half of the 19th century, the rate of building probably accelerating towards the end of the century.

I haven’t been able to find any information on the timing of the expansion of Openshaw-it presumably is not on the internet, and a visit to the Central Library looks necessary.

The typical development was for rows of terraced houses, mainly two up two down, with common closes giving access to the backyards. Looking at photographs of Openshaw ( the Facebook page is a very good place to go) this appears to be the model that was overwhelmingly adopted. My experience is of the house I grew up in, on Cornwall St, and of those of a few of our near neighbours, but I would think that it would be entirely reasonable to assume that most of Openshaw’s housing was similar to ours. 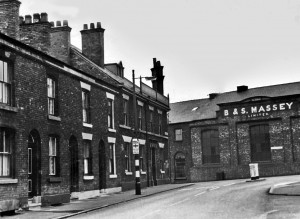 Two bedrooms and two living rooms is not much space and our family, with two boys, was certainly a bit crowded, although we did have a full length, full height cellar, and a lean-to kitchen, which helped a lot to expand the living area. In Victorian times, and perhaps also in the early 20th century, families with only two children would have been the exception, and the crowding in those houses must have made life difficult.
The rooms in our house were small, about twelve feet square. The front door opened off the street onto a vestibule, maybe three feet square, which kept the front door draughts out of the parlour, and was a hanging space for overcoats.

The parlour had a fireplace, and in fact all rooms had fireplaces, even the bedrooms, because open fires were the only means of heating. There were heavy wooden folding blinds at the windows, which must have been for heat insulation. They were never used, not even in the wartime blackout, when we had a blackout blind instead.

The stairs separated the parlour from the living room, and a curtain at the bottom of the stairs stopped any draughts from coming down from the bedrooms.

Beyond the stairs was the room we used as a living room, but originally it had been the kitchen, and for the other houses on our terrace, this was still the case. So originally all the cooking and washing and eating was in this room, with the parlour used as a living/sitting room. Because we had a lean-to kitchen, we used this as our living room, used for everything from eating to reading, listening to the wireless, and so on.

The main feature of this room was a Victorian range, which dominated one of the walls. The range was coal fired, and apart from heating the room, was originally used for all the cooking, and also for heating water for washing. The cooker was on one side of the fire, the water heater on the other. The fire basket was a couple of feet off the floor, and the total height to the mantel piece was around six feet. This range took up most of one wall of this room. Because we had a separate kitchen, we used this room as a living room, and seldom used the parlour. This always seemed odd to me, given that we were not exactly flush with space, but I suppose that the reason had to do with heating the parlour, and using twice the amount of coal. It was used at Christmas, and when we had company. 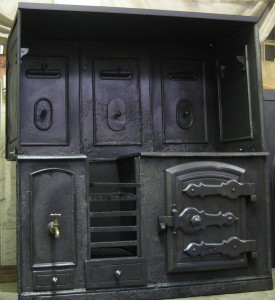 Another feature of the kitchen/living room was a clothes drying rack near the fireplace, operated by a pulley, and raised to the ceiling when full.  The weekly wash was a major chore, and part of the process was drying and airing the clothes on this rack. In the summer, clothes were hung out to dry in the back close, and then hung on the rack to air, but in the winter, the clothes rack plus a small folding clothes dryer placed in front of the fire, were used. This meant dodging drying washing when moving about the room for several days after the wash. You get used to the smell of damp washing.

This Victorian range was taken out in the early 1950s, and replaced with a modern tiled fireplace. Today we would probably be going the other way, replacing tiled fire surrounds with Victorian ranges, but they were deeply unfashionable in the 50s. The old ranges were also very uneconomical, using a lot of coal, and most of the heat going up the chimney.

Our kitchen was down three steps, and around six feet wide by eight feet long. It was a lean-to, and had been added before my parents moved in, sometime in the 1920s. The electric cooker was on the left as you went down the steps, and a sink on the right, against the outside wall of the house. I remember only having cold water when I was very young, but an electric immersion heater was added when I was about ten. Luxury.

The lavatory was across the back yard, on the other side from the kitchen. No heating, obviously, and in the winter my dad used to put a paraffin lamp in there, just to stop the cistern from freezing. It was not a pace to linger.
The walls around the backyard were about seven feet high, and the back door let onto the back close (the entry, we called it), a common access to the houses on our terrace and to those on Princess St (later Press St) and on the Old Road. This was our main play area as kids, and was a safe environment close to our mothers. It was also a good meeting place for our mothers, and a lot of gossiping went on there.

To the right of the fireplace, in the corner of the room, were the steps down to the cellar. This ran the full extent of the house, and was full height, so it was a very useful addition to our living area. I don’t know how many houses had cellars, and certainly not all the houses on Princess St had them, so I can only assume that living arrangements were a lot more difficult.

Our cellar was used for coal storage, fed from a coal grid on Cornwall St, as a workroom for my father, and as the washing area. For this we had a coal fired boiler and a shallow sink, called a slopstone by my mother. Washday was a very labour intensive activity. The cellar was where we bathed, on wash days, making good use of the fire under the boiler, and after the washing was done.
The cellar had windows front and back, with metal grids set out from the wall, to get light into the rooms. The grid at the back let onto the backyard, and was generally quite clean, but the one onto Cornwall St got dirty and full of cigarette ends, bus tickets and so on.

The steps down to the cellar were stone slabs, and during air raids we kids used to sleep on bunk beds under the steps. It would have been the safest place in the house in the event of a bomb hit, and as the house was just a couple of hundred yards from the north east corner of Gorton Tank, we were likely candidates for a near miss. I remember also that we kept a large washtub of drinking water in the cellar, in case we were bombed and trapped. Not a good environment to bring kids up in, but for us kids, it was all we knew, and it was fun picking up shrapnel pieces from bombs on the morning after a raid.

The house was single skin construction, so had no wall cavity. This meant that it was extremely cold in the winter, and draughty windows and doors didn’t help. First one up in the morning, normally one of my parents, got the fire going in the living room, and when it was going well, it made that room comfortable. But moving out, to the parlour, or to a bedroom was cold, really cold, in deep winter. Hot water bottles to go to bed, but getting up in the morning needed a lot of will power, and dressing was quick.

This was the house I grew up in, and I lived there for most of the time until I was 24, when I moved out for good. As a small child you accept the environment you’re born into as the norm and don’t really think about it, but as I grew into my teens I began to appreciate that it was a house that no longer met the standards of the day, not even those of the 1950s; poor heating, no plumbed bathroom, outside lavatory, poor insulation, and short on space. It was demolished some time on the late 1960s, and my parents were moved to modern accommodation, a flat in Romiley. This was typical of Manchester Corporation’s redevelopment policy. They spread the Openshaw residents far and wide, a lot went to a purpose built new estate in Hattersley. No thought was given to trying to keep the community together, and in the process a very close-knit and supportive neighbourhood was destroyed.

As I said at the beginning of this post, I think that most of the houses in Openshaw would have been similar to ours with probably no major differences, but I would be interested in any comments that show me otherwise, and of what kind of living arrangements people had.