Games We Used to Play

Growing up in the 1940s and 50s we used to spend most of our time playing in the street. There was no TV, certainly not in the 1940s, and the growth of TV ownership was very slow in the 50s, due to the expense of a set. There were some specific radio programmes for children, notably Children’s Hour, which I remember that I listened to a lot, but can remember nothing much except Toytown, with Larry the Lamb and Ernest the policeman. When we were a little older we all listened to Dick Barton, Special Agent, but this was really an adults’ programme, and on late enough to be close to bed time.

Computer and computer games were not going to happen for many years, and toys were nothing like as good as they are now, and in any case, they were expensive and we didn’t have many.

So we played on the street with all the neighbourhood kids. Traffic was a lot lighter, so the streets were safer, and as people were much less mobile, the people we met on the streets were predominantly local and known to us or our parents, and so judged safer than streets full of strangers. There were also policemen walking the streets in case we got into any trouble. 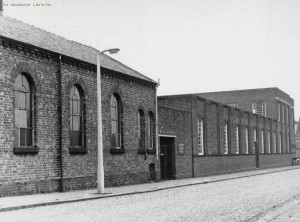 Football and cricket were the mainstays, at least for the boys. We played football on Princess St, which was concrete and the ball bounced more reliably, and between the Baptist chapel and the wall of Gorton Tank there were no houses and almost no traffic. The wall of the Tank was very high, but we did occasionally kick a ball over it, and then had to keep an eye open for a workman walking at the top of the wall (there must have been a parapet at the top of the wall with a walkway behind it) and ask him if we could see it.

We were very well equipped for cricket, because we played in the alleyway between the two rows of houses. There was a stump at the entrance to the alley to stop any large wheeled vehicles entering, and this was the ideal size for a set of cricket stumps. The alley was about twelve feet wide, narrowing to about four feet where the Locomotive pub wall started, and we played our own version of cricket, called two-four-six. If you hit the ball to the pub wall it was two runs, into the narrower alley was four, and right down the alley to the place where it turned through ninety degrees it was a six. Bowling was overarm from near the pub wall or underarm from a drainage grid halfway down the alley. Hitting into someone’s backyard was out, and catches from a rebound off the wall had to be one handed. Ideally played by four, one batting, one bowling, one keeping wicket and one fielding halfway down the alley, but it could be played by two only, if the batsman didn’t mind running after missed balls.

Football and cricket seasons were defined by the time of year, winter for footie, summer for cricket, but other games we played also had seasons, and quite how they were decided was unknown. We used to play whips and tops, and the way you knew it was the season was that everybody was playing with them, there seemed to be some kind of collective unconscious decision making process that was taking place. Whips and tops were played by boys and girls, and I think the girls were generally better, they were all certainly better than I was, because I was never any good. 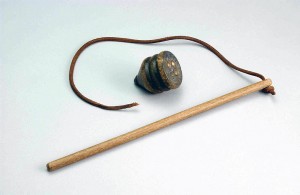 Boys played marbles, or alleys, as we called them. I learned much later that cheap Victorian marbles were made of alabaster, which is where the name came from. We didn’t play into a hole or target, but along the gutters, winning alleys by hitting our opponent’s alley.

Skipping was almost exclusively a girls’ game, with all sorts of complicated skipping and chanting going on, sometimes with contra-rotating ropes. It was considered too sissy for boys in spite of pictures of boxers skipping.

Hopscotch was also mainly or maybe exclusively a girls’ game, played on a chalked plan on the pavement. I hadn’t realised how international hopscotch is until I saw a Saudi film recently in which the kids played it.

We played traditional group games like hide and seek, and variations on this, where several kids hid and one had to find them all and keep them “in prison” until they were all found, and someone who was still free could release the prisoners if he could get to them while the keeper was away.

Chasing games like tag (we called it ticky-it) was a favourite, and we also played cowboys and Indians with a finger and thumb for a gun.

Most of us had home made buggies, called guiders by us, made by dads out of pram wheels and spare planks of wood. Steered by feet on the front axle, which was pivoted, and ropes to the ends of the axle. Whitworth St was a favourite place because it sloped, otherwise it was a case of pushing for a while until you earned your turn to drive.

And when we got tired of making up our own games we went to George St park, now Openshaw park, and played on the swings and roundabouts.

A very comprehensive article on childhood games is here on the Manchester History site. Well worth visiting.