We used to thrive on comic books when I was young. When I was at primary school my favourite, and regular read, was the Knockout, and occasionally Film Fun and Radio Fun. Knockout was a strip cartoon magazine, the same characters coming up every week, Stonehenge Kit the Ancient Brit, Our Ernie, Billy Bunter, Sexton Blake, 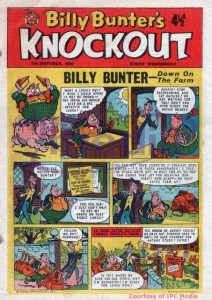 Film Fun and Radio Fun were occasional reads, I remember Laurel and Hardy in Film Fun, but I don’t recall reading Radio Fun much. It included UK radio stars like Arthur Askey and Tommy Handley, who were favourites on the radio, but for some reason I didn’t take to them in the comic.
I never got on with the favourites, Dandy and Beano, although I really liked Desperate Dan, an amazing cowboy located in the UK, for some reason. His favourite meal was cow pie, complete with horns sticking out of the pastry.
When I outgrew the Knockout, I started reading “serious” comics, by that I mean the Adventure, Wizard, Hotspur, Rover and Champion. These were print comics, and the graphic comic strip was replaced by words, lots of them, densely packed. Practically the only drawings were the front title page and one or two pictures accompanying each story, so they were in effect books pretending to be comics. The readership must have been huge, because practically everybody I knew read them regularly. The stories were serialised, but most of them were in stand-alone episodes, so missing a week was not a calamity.
One of my favourite characters in the Adventure was Wilson, the wonder athlete. He was born in the 18th century, 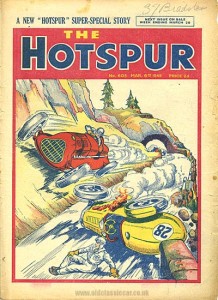 developed a system to slow his heartbeat down, and was well on the way to living until he was 200. He ran in a sort of onesie leotard, and ran a three minute mile in the 1940s.
Smith of the Lower Third was another Adventure series, about a public school boy, Tom Smith. I don’t know what was the attraction to a group of working class boys reading about public schools, but we did, and enjoyed them.
Alf Tupper, the tough of the track, was another athlete but not in the mould of Wilson. Alf was an anti-authority figure, constantly battling with the authorities in the athletics world, and always coming out on top, of course. Living on fish and chips. Which schoolboys would really identify with.
Alf, I think, was in the Rover, which had another favourite of mine, H K Rodd, who as a boy was subjected to an experimental upbringing, giving him super powers. Today we might call him bionic. His twin brother, Denis, was educated conventionally to act as a normality check, to see how much HK had been improved. HK could pick up radio broadcasts in his head, had telephoto eyes, and could shoot out the tyre valves of a car travelling at 60 mph. 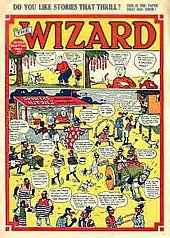 Impressive, but I always had sympathy for Denis, having that for a brother.
Football and cricket featured strongly in the storylines, a lot of fantasy stuff about schoolboys being plucked from obscurity in minor, local teams and playing for first division sides, always doing well, and often winning matches against impossible odds, and in spite of being injured. Cannonball Kidd was one of these.
One series that I liked was It’s Goals that Count, football, obviously, which became It’s Run that Count, then It’s Wickets that Count, and so on, really milking the theme.
These comics were not a trivial read, and we must have had our heads in them for a substantial part of the week. No TV, no computer games, so these were a release to a great imaginary world of sporting heroes, anti-authority figures, supermen (no superwomen-these were boys’ comics) and more. I suppose they were the definitive pulp fiction, but they were 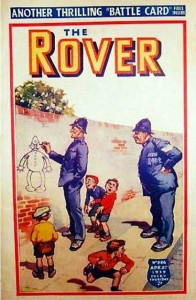 amazingly inventive and interesting, and were produced 52 weeks a year, an impressive output record. Without being educational in any way, they brought us knowledge of times and places outside of our world.
The comics carried a lot of advertising, of the Charles Atlas type, but the one repeat ad that I remember particularly was for a seebackoscope, and device with two 45˚ mirrors that enabled you to see what was going on behind you, so you could spy on people you’d just passed in the street. Who said innovation was dead.

By the time The Eagle had arrived, which was a glossy return to the picture strip comic, I had outgrown them, so Dan Dare and the Mekons were unknown to me.