Openshaw was a very working class district, but there was tremendous pride in the houses and streets.

The houses were of poor quality and facilities, and, having been built in the 18th century, were getting old, and in some cases dilapidated. In spite of that, maybe even because of that, most housewives were very house proud, and kept the houses clean and tidy, inside and out. 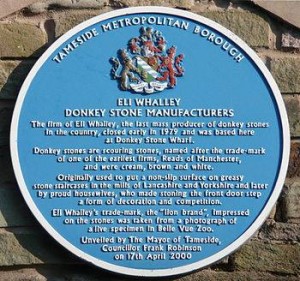 A part of the thinking was a fear of being thought “common”, which translates into uncaring, sluttish, not cleaning your house, kids badly turned out and dirty, and generally falling below the normally accepted standards of behaviour. There were enough of what my mother called rogues and deadlegs around, and we didn’t want to appear to be like them.

Neighbours dropped in frequently, and any falling below the standards would be noted and commented on. So it was important to keep the house well turned out at all times. A part of this was probably a kind of feeling of inferiority, being at the low end of the economic spectrum, and wanting to appear, and to probably be, moving up the respectability ladder.

After cleaning the inside of the house, the focus moved to the front 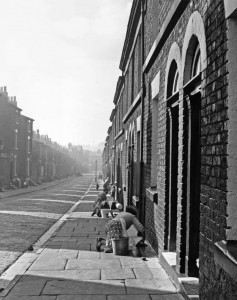 step, and then onto the pavement. The step would be brushed, washed down, and then a donkey stone was used to colour the step and pavement. These were sandstone blocks, given to housewives by rag and bone men, who came round with a horse and cart, collecting rags and unwanted household items, exchanging them for a donkey stone. An early form of recycling.

I used to think the name donkey stone was because of the horse and cart, but it derived from an early trade mark.

After wetting the step or pavement, the stone was rubbed over it, and then smoothed out with a cloth to give a smooth finish.

A level higher than the step and pavement was painting the front of the house, normally with a dark red glossy paint. I first noticed this at the time of the coronation in 1952, when some houses were painted for that occasion, but some continued to be painted for years. 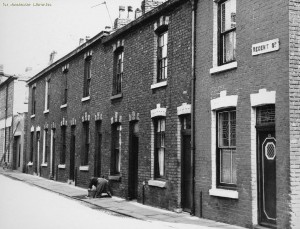 The streets were notably cleaner than they are at present. It’s true that there was

a lot less wrapping to throw away, and plastic bags  hadn’t made their appearance, but almost everybody smoked, so there was a lot of empty cigarette packets to be got rid of.

I think this gets back to people having much more pride in their district, streets and houses. 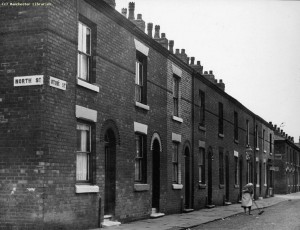 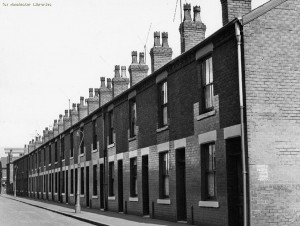