A comment by Tony Haigh about the Rex cinema took me back to my young childhood. I was a regular at the Rex on Saturday mornings for the latest cowboy picture, or Flash Gordon, with special effects that we knew were poor even in the 1940s. My favourites, though, were Abbot and Costello with their childish slapstick comedy; made me laugh till it hurt.

We did fairly well for cinemas in Openshaw, with three cinemas in the space of a mile. The Rex was the bottom of the pile, the Bughut we called it, and it had the poorest films. For us kids it was a great Saturday morning, trying to get in for free at the exit doors, and cheering the goodies in the cowboy films. The standing joke was that if you sat too close to the screen you got dust in your eyes.
Further up the Old Road was the Alhambra, which was the poshest cinema in the area. I didn’t know anything about cinema chains then, but the Alhambra must have belonged to a major chain, because it got the best mainstream films.

Tony says he remembers a doorman, the man with the metal arm, who used to tap wrongdoers on the head with his tin arm. I don’t remember him. Wish I did.

Just round the corner from the Alhambra, on Old Lane, was the Whitehall-later the Regal, I think. The Whitehall was something of a specialist cinema, less popular films, probably foreign films, although I can’t say that I remember if that’s true. I know I didn’t often go there as a child, but did more so as I got older. 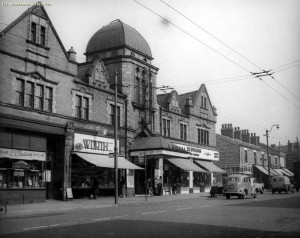 Going to the pictures was extremely popular in the 1950s. TV was only beginning, and the wireless wasn’t enough to keep us at home every evening. The pictures were glamorous, a view on a different world, a big world outside Openshaw. And you could go often, it wasn’t expensive, and the programmes changed twice a week. It was good value for money; the normal programme would typically have been a B rated film, often a black and white American detective story, a newsreel, because not many people had TV, so the newsreel even if several days old, was the only way we could see the news rather than hearing it, a cartoon, Tom & Jerry was the best, and then the main feature.  And the odd thing was this was what was called a continuous performance, it started about the middle of the day, and just ran on, repeating the programme, until it all ended at about 11pm. So you could go in at any time, anywhere in the film, and get up and leave when you got round to the point where you came in. Hence “This is where we came in”. Seems odd to me now, but was normal then, watching a film from the middle, it made working out the plot difficult to fathom: “So that’s why she murdered him”.

Cinema going was at its peak in the late 1940s, early 1950s, peaking at about 1.6 billion admissions a year. For a population of around 50 million, that’s 30 visits a year to the pictures for every  man,woman and child in the country. Attendance fell through the 50s, as TV took over, but it was still 800 million admissions in 1960.

Two stories about the popularity of the pictures; sometime in the early 1950s I went to see a John Wayne film, The Flying Leathernecks, at the Alhambra. We had to queue all the way up the side of the picturehouse, it was so popular. I saw it recently on some old film channel, and after I’d watched about ten minutes, I had to turn off, it was so bad. I saw The Glenn Miller story in the Odeon in Manchester, and the cinema was so full I sat on the steps between the seats. Health ans Safety, what’s that?

TV sets at this time were very expensive (and by today’s standards, not very good).  In about 1960, a 17 inch TV was £70, when the average wage was £14 per week. So that’s five weeks’ wages for a TV. At today’s average wage, that would mean a basic TV would cost the equivalent of over £2,500. Seventeen inch, remember.

Which is why we didn’t have a TV at home when I left, in 1960. The only realistic way to get a TV was hire purchase, which my parents were against.