I lived the first 20-odd years of my life in a house that was about 100 yards from the South wall of B&S Massey, the dark red brick wall going up Ashton Old Road towards the canal bridge. I was never curious about the firm, what they did or how long they’d been there, it was just Massey’s, and my main memory is of a drop hammer going every ten seconds, all through the day, and when the economy was good, all through the night as well. What was behind the wall was completely unknown to me, and I don’t think I ever met any people who worked there. My parents had a lot of friends, railway people, members of the Loco working men’s club, neighbours on and around Cornwall St, but nobody from Massey’s that I can remember. Even if they had, I doubt that, at that age, I would have been interested of what happened behind the walls.

My only other memory is of a storage yard making the corner of Cornwall St and AOR where they stored what I think were formers for making moulds, very odd shaped constructions of wood, I think. Every now and then a man would appear driving a fork lift truck and take one of these things across AOR to the factory. I assume that they cast the steel formers and then beat them into shape with the drop hammer.

My awareness of the company changed when Keith Hindley, on a post to openshawmemories.uk  mentioned a book about its first hundred years, Sons of the Forge, by Hurford Janes, a book commissioned by Keppel Massey, MD at the time of the centenary.

I managed to find a copy of the book , in surprisingly good condition, and all the material that follows is from the book.

The Massey family came with the Normans, and were mentioned in the Domesday book, holding the barony of Dunham Massey near Lymm in Cheshire. The title became extinct, and the next record is of Peter Massey, born in Manchester in 1753, who had a haulage business. His son was Richard, who became a slate merchant, bringing slate from North Wales to Manchester. Richard had ten children, of whom nine survived, including Benjamin and Stephen, who went on the form B&S Massey.

Benjamin and Stephen decided they wanted to be mechanical engineers, and  were apprenticed to firms in Oldham, Salford and Hyde.

Their father then rented the canalside premises in Openshaw, from George Legh, local landowner, for £28 per year, about £3500 in 2020 values, and he funded the building of the factory. This was known originally as the Openshaw Canal Iron Works. This was in 1861. Steam hammers had been invented a few years earlier, and they decided to make these as their main product.

It was not a particularly good time to start a company, as the American civil war had disrupted the supply of cotton, and the mills around Manchester were idle. The book refers to the usual procession of wagons going up AOR from Manchester to Ashton and Stalybridge stopping, and the road being deserted.

But they survived, at times with loans from their family, and the first steam hammer was delivered in September 1862, and cost £160. The factory employed 20 staff at this time.

Slowly business started to grow, and Massey’s reputation for good products started to be known. They had a good export market, and won various medals at exhibitions. Things were tough in the1870s, though, as Germany and the USA, both large markets, adopted trade protectionist measures.

The Masseys were non-conformists, and always interested in the well being of their staff. An early example is an invitation to all staff “and a lady friend” to a social evening at Lees St schoolroom, attached to the Congregational church. They set up a workers’ profit sharing scheme in the 1880s, were the second company in England to adopt a 48 hour week (54 was the norm), in 1890 they started a benevolent fund, paid for by the workers with a contribution from the firm. This paid for absence due to illness, for medicines and so on. A workers’ canteen followed in 1902.  Altogether a very forward looking management style.

So this was Massey’s, a company  world renowned world renowned  for  its products, and a forward looking, benevolent management style. And I lived on top of it and knew nothing of this at all. Just a big, brick factory that I passed four times a day on my way to Elysian St and back.

The book ends in 1961, celebrating 100 years un business, and going strong at that time. What happened later, I don’t know. I do know they were still in business in Openshaw in the mid-sixties, when my parents moved, and I lost contact with the district. There is a company in Hyde, Massey Forgings, which sounds close enough to be what B&S Massey might have become, but I’m not sure.

I got this from a science museum group website:-

In June 1960 the great grandson of the founder joined B & S Massey Ltd. Christopher N. Massey became an assistant to the chief service engineer. In the following year the company became known as B & S Massey & Sons Limited and still carried on business as steam and power hammer manufacturers. Under the control of Keppel Massey, John H. Byam-Grounds and Cyril J. Gunton. In July 1975 a Special Resolution was proposed and it is recorded that B & S Massey & Sons Limited became a controlling interest of Head, Wrightson and Company Limited which was eventually acquired by the Davy Corporation then renamed Davy McKee until 1987 when Head Wrightson closed. The name of B & S Massey Limited continues however it is unclear as to what the company does.

If anybody has any better knowledge of their recent history, please post comments below. 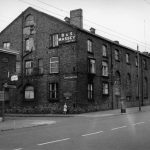 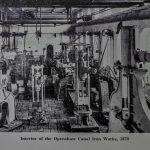 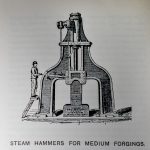 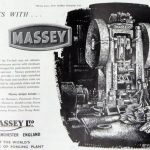 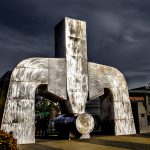 The worker in the photo on the right is Peter Etchells, Forge Master at Massey’s, and his assistant on his right is Bobby Cooke. They are operating the 10 Cwt hammer. 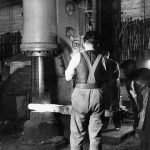 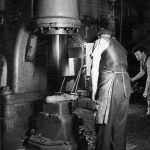